Is this tour right for you
This tour is ideal for first time visitors to Copenhagen – who wish to see the main highlights. It is a coach tour – but involves walking of approximately 200 metres to and from the courtyard of Amalienborg Palace, over some cobblestones. The landmarks will be viewed from the exterior only – with photo stops where possible. The order of the tour will depend on traffic.

Copenhagen is one of the most historic cities in the Baltic region and on this introductory tour of the Danish Capital you will explore nearly 850 years of history.

Enjoy the view from your coach as you pass the City Hall Square. The long pedestrian street, Strøget, connects the City Hall Square with the King's New Square, and along this street there are plenty of shops, boutiques and cafés. On the other side of the City Hall Square, pass the world famous Tivoli Gardens – founded in 1843 and offering a wealth of flowers, restaurants and entertainment. Passing the Glyptotek Art Museum, you reach the Christiansborg Palace – home of the Danish Parliament and the Queen's Reception rooms. On the other side you will see the old quarter of Copenhagen, lining the route of one of the city's many canals. Here you pass the old Stock Exchange – a building in Dutch renaissance style with its spire of entwined dragon tails.

Driving on through the colourful canal area of Nyhavn – once a disreputable area of the city, frequented by sailors and home to bars and entertainment of questionable taste – now a most charming part of Copenhagen with brightly coloured houses along the canal. Amalienborg, the royal winter residence, is the next site to be seen. It is the residence of the reigning monarch, Queen Margrethe II. At the beginning of the 17th century King Christian IV decided to build himself a summer residence – Rosenborg. You will drive by Rosenborg Castle, which houses the crown jewels and a collection of royal memorabilia, such as Christian IV's pearl-studded saddle.

Your city tour would not be complete without visiting the world famous statue of The Little Mermaid, watching over Copenhagen harbour. The story says that she is a sea king's half human and half fish daughter who must sit on her rock for 300 years before she can enter the world of humans. She has been sitting here since 1913, so she still has a few more years to wait. 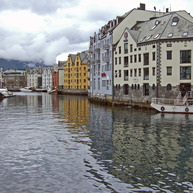